Time changes a bit when you travel around the world. This is by far the longest journey I have ever taken. I tried to sleep on my plane ride, I really did. But nothing really worked. I dozed off a few times, but not for very long. By the time the plane landed in the early afternoon I had basically been awake forever. Honestly, I can’t even quite figure it out, time zones, addition, subtraction, I don’t know. I think in total I was traveling for nineteen hours?

The airport was slightly confusing. They do things so much differently in Hong Kong though. Immigration is fairly easy, just another long line. No long customs line, declaring anything. No stupid form you have to fill out saying nothing. Just walk out, through the doorway that says “Nothing to declare.”

Once I was out, Cherryl was waiting for me. I didn’t see her in the crowd right away, but she found me. Man, I knew she small, but seeing her in person allowed for a perspective that you don’t get over a video call. I was exhausted and a bit out of sorts but she guided me and we found our way to the train. From there it was a bit of a trip to Central. Once we arrived, we made our way the half-mile to my hotel.

The room is so small, once again, I knew it would be, but I really didn’t understand. Next time, I’ll make sure to get a much better room, a different hotel. Maybe a different part of the city. But, it is what it is. Don’t know yet when or where my next trip will be to visit her. We’ll figure that out when the time comes.

We went off to dinner before she had to leave to go back home. Found a little cafe type place. Probably over-priced, food wasn’t great, but it was nice to be there with her. We talked about the things we’d do together while I’m here, never really came up with any solid plans, just know which days she’s free and I’ll be seeing her.

Once she left, I was alone in my tiny room. I watched TV shows I downloaded and YouTube videos. Just couldn’t sleep. I haven’t really slept much at all. Monday morning I walked off to the nearby Starbucks to get some coffee and food. I had to psych myself up to even leave the hotel. Wandering around a big foreign city alone is daunting. I want to explore. I want to walk around and see the city but not alone.

With coffee and breakfast in hand I returned to my room, spent all day in bed trying to sleep, the jet lag has been killing me. I’m sure I slept, a bit here and there. But once night came, I was wide awake. No matter how much I tried to sleep I couldn’t. Really, night here is day at home. Makes sense, my body has its own clock. Tossed and turned all night

Tuesday I basically repeated the same pattern. Got out of bed, showered, dressed. Walked down to the Starbucks and picked up the same thing as yesterday; venti caramel macchiato, bacon/egg/cheese sandwich, and a chocolate muffin. But I won’t have leftovers for dinner tonight, so I will have to venture out again, find some food. The thought of doing that makes me feel uneasy.

Turned out, I slept all day again, and wasn’t even hungry for dinner. Of course, I ended up not sleeping during the night. Seems no matter what I do I just cannot get over this jet lag. I have a feeling I’ll be here just long enough to make me suffer from it again when I get home. Although, I will have some help in Atlanta to get to sleep.

A Day at the Zoo

Wednesday was a holiday here in Hong Kong, Labour Day, so Cherryl had the day off. We spent the entire day together, starting early with breakfast, then a lovely morning at the nearby Zoological and Botanical Gardens. So many pretty flowers and cool looking plants. I have a lot of pictures still to post to Instagram, so head over there to check them out. I just added another one since I was thinking about it. Unfortunately, most of the animal cages made it hard to get any decent pictures.

After the zoo, we wandered around the city a bit. Checked out some spots for possible dinner, then headed to a nearby 7-eleven to pick up something for lunch. Nothing special, just some cooler case food to bring back to the room. The jet lag was still something fierce, ended up napping together for a while. It was really nice, I wish we could do that more.

In the evening we headed out looking for dinner. We had a couple of false starts, but ended up at a pretty good place, The Diner. It’s touted as “HK’s only authentic American Diner.” And they actually do a pretty good job. The only real problem I have with it is their menu. I think they serve anything at any time, but it really isn’t clear. The only menu they gave us was basically burgers.

Overall, it was a great day. I just wish Cherryl had more free time, or my trip could have been longer. But as it is, I think we are doing pretty good with the time we can spend together. We’ve made plans to go to Disneyland on Sunday. That will be fun. Of course, I have a few days to fill between now and then. I should probably wander around the city or something, I don’t know.

Really, I should get out more. I actually spent most of the day downloading and installing games to be able to play once I’m back home. The day with my usual Starbucks run. I just can’t really motivate myself to go anywhere or do anything.

Cherryl and I decided that instead of Disneyland we will be going to Ocean Park on Sunday. I’m excited, I think we’ll have a great time. There’s a decent chance of rain, but Ocean Park seems to offer more indoors-y stuff to do in that case.

I really do wish she had more free time. Next time I visit her we’ll do a much better job of scheduling. Of course, there’s also the possibility that the next time I come to visit it will be in the Philippines and not Hong Kong. I wouldn’t mind coming back here though. Even though I haven’t left my hotel room nearly as much as I should, I like it here. I’m becoming more accustomed to the city and feeling more comfortable.

I think the jet lag was doing a number on my head too. I seem to mostly be past it, I actually slept at night last night. Although, I was awake from midnight to around four in the morning. I really did underestimate what the time difference would do to me. I’m not as young as I once was.

Sunday started out early with Cherryl arriving at the hotel around 7. We went out for a nice breakfast at Wagyu, a local eatery. Got me some eggs benedict with a nice mocha. After that, we made our way to Ocean Park. I was originally going to make a wholly separate post talking about it, but I’m not really feeling it at the moment. I’m really bad at this blogging thing, eh?

We had a great time at the park, rode all kinds of rides and saw all the exhibits. I’m pretty sure I enjoyed it much more than I would have if we had gone to Disney instead. The park had roller coasters and all kinds of animal exhibits. We enjoyed great food while we were there too. Even when it rained it really didn’t bring us down. It was just such a great day. Check out this gallery of images I took (way too many photos). 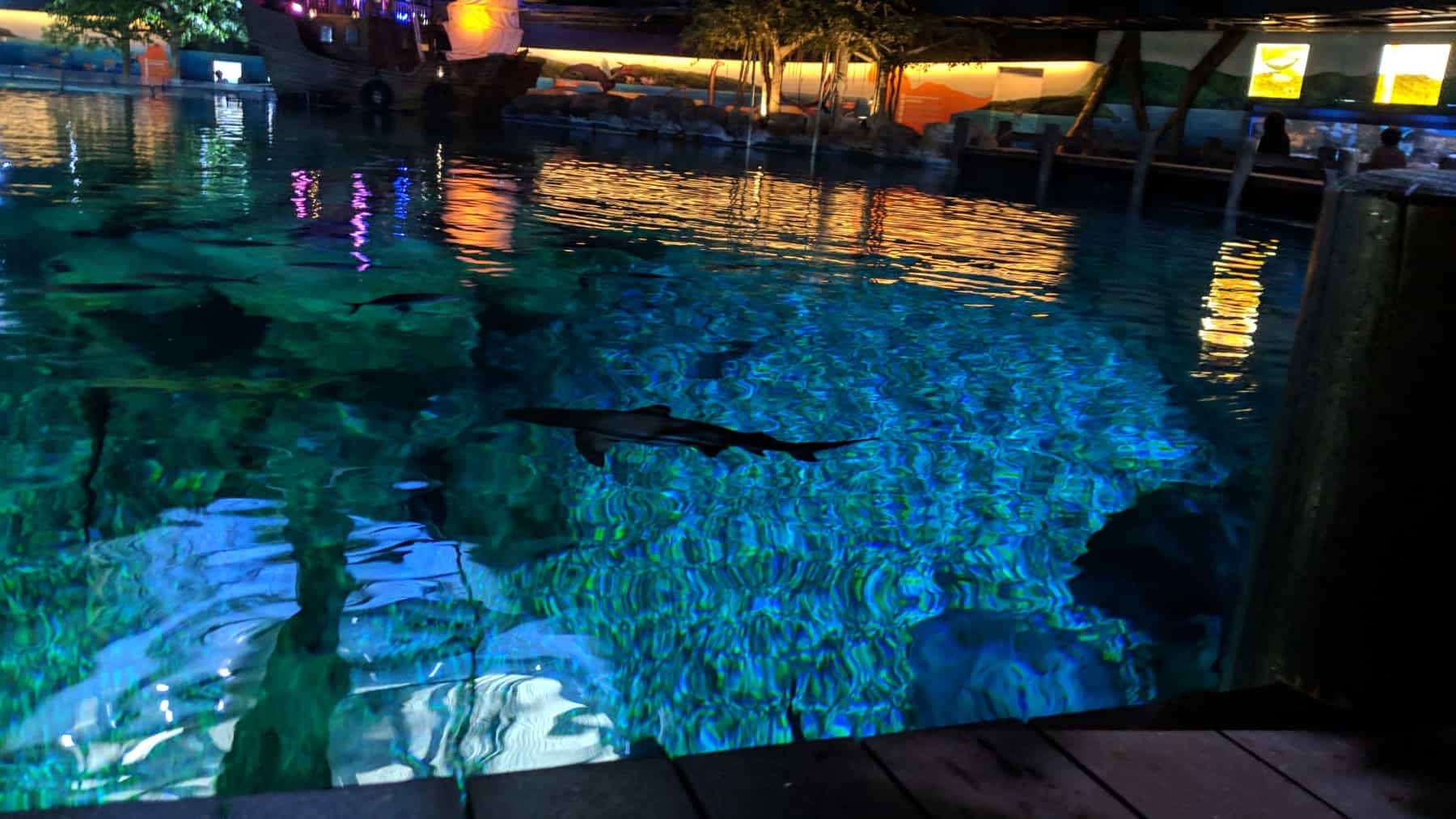 Not a whole lot to say really. Just another day alone. I played Minecraft in my room, started Sky Block 4. It’s not so great to play in this laptop. The touchpad kinda sucks, especially for a gaming laptop. It doesn’t recognize button presses when trying to move, turning is a bitch because it takes a couple tries. Maybe I’m pushing this thing too hard?

The whole trip home was a bit of a blur. Over twenty eight hours of travel across four airports. It all started with an Uber in Hong Kong. Dude wanted to talk, made me feel bad that I didn’t do more in the city. Honestly, by the time I was leaving I was almost feeling comfortable enough to venture out solo. Given more time (and money) I’m sure I would have.

Overall, I really liked Hong Kong. For a big city it has a lot of heart. I can’t really say what it was about the city but I just felt good there. I’ve never really been a big city guy, although I haven’t spent a lot of my adult life in any kind of city, but Hong Kong just felt good. I look forward to visiting Hong Kong again in the future and can’t wait to see more!